May 30, 2014
Back in 2007, I ran an event at Origins and Gencon for Confrontation, the game put out by the french company Rackham. Beautiful, metal miniatures, and the company announced that year they were going to all pre-painted plastics, and a year later were bankrupt. Cool Mini or Not is trying to bring the game back, but I digress.

The game was a single player against the board - the story was a volcano was erupting and you were trying to recover as many gems as possible, but they were being guarded by elementals (fire, earth and air, the water one had not come out yet). I painted up everything for 6 games. That sat in boxes for the last 7 years after the game went under.

A little while ago I was talking with my oldest son (who is playing KoW Undead) and something reminded me of these, and once I had gathered them, I realized I pretty much had a nature army - I just needed to rebase them (since Confrontation used 37.5mm bases). I then got the motivation to actually do this when GenCon increased my events in August from 8 to 12 (I had intended 10). So I needed more demo armies. A troop of Lesser Obsidian Golems gives me 2 1000 pt Abyssal Dwarf armies, and I have 1000 pts of Twilight Kin that I was saving for the next escalation league, and so I wrote up a Nature army based on these old miniatures. I just need a troop of Forest Shamblers (so far I'm not very happy with my conversions for these), and to paint up my kickstarter Keris and Ozzee as a generic druid and companion.

So here is everything but the trees and druid, a nature army to add to my demo armies. 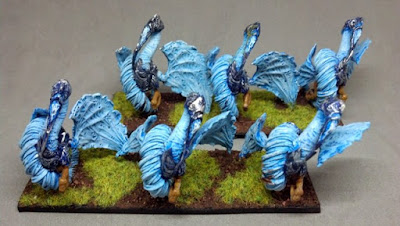 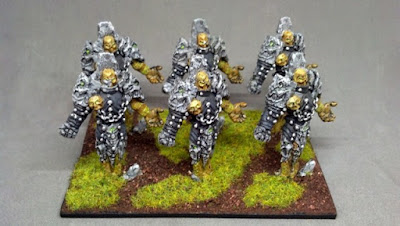 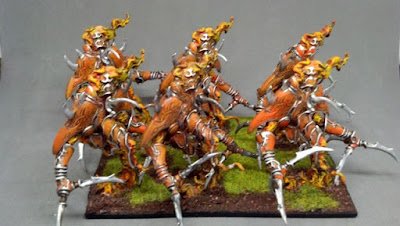 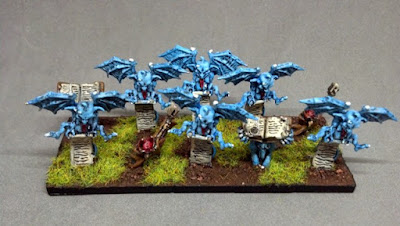